For years, rumor has it that not all the 379 production cars were silver. Allegedly, some of the cars were white and some were red. I have heard the stories and I have read wild guesses and misinterpreted information about the Fabulous Flatnoses. But over the years, I have not found ANY prove of red or white production cars having left the factory back in 1986. Let alone a car in itself.

I have, however, a trusted Swedish informer with SAAB knowledge and relations, who knows in first person about white and red cars among the 379 examples. Also, this informer saw a white 1986 flatnose convertible (non-prototype of course) being offered for sale in the USA about 15 years ago. Unfortunately he lost all prove due to hard disk failure years later. And prove is what this Registry is all about.

The thought of not succeeding in elucidating this matter, well… it was to some extent unbearable. So for quite some time he and I have been informing, searching and reasoning but were really not getting anywhere. No ‘official’ source (retailers, importers, factory or museum) nor any internet source had convincing evidence or even plausible conjectures of at least ONE car not being originally silver.

Yes, the SAAB Museum claims their cherry red 1986 convertible is a production car, but the prove to me is insufficient and I am truly convinced it is a PRE-production car. Absorbing quests like these were in fact the reason for me to start the Fabulous Flatnose Registry in the first place.

But in January 2015 the prove came along totally unexpected, when I was rashly clicking along Youtube and ran into this 1987 commercial:

What we see in that commercial is the first originally white production series ‘fab flat’ to be reported in years (that I know of, of course). Below is a 1986 picture of a that very car in motion, hence the poor quality. But the car is a true flatnose, rebuilt to slant nose. Based on the information I have, this conversion was in all likelihood done by SAAB itself. The VIN proofs its species: a ‘G-series T16 manual’ VIN, no doubt about it. The April 1986 registration certificate is also unquestionable. Color: white. 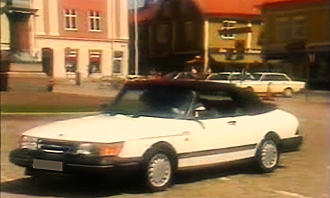 This car, with serial number 021807, was built in February or March 1986, to the same standards as the other production Fabulous Flatnoses in the registry. It is one of the first 23 cars to have been produced and one of the 29 cars that remained in Scandinavia, instead of being sold to the USA. This very rare and historically interesting car blissfully is still around, privately owned by an owner who wants to remain anonymous. It has travelled 122,000 miles.